Did you know that there is one hemp product that has been sold in tens of thousands of stores around the world for years? And that it already has tens of millions of current frequent customers, as well as the most potential future retailers, customers, and products?

Yes, it’s true. Although only invented in 1996, this hemp product is 100% legal to FDA and not needing any more certifications or approvals from any agency in the U.S., Canada, or the E.U.

This one hemp product is literally hemp’s first billion-dollar segment, 90% of Canadian hemp, and one which doesn’t even necessarily require land, equipment, or a factory with which to get started. It’s such an important and high volume product that USDA tracks the retail prices of it.

Not a medicine yet it is medicinal; it’s been found to be anti-inflammatory, anti-oxidant, kills cancer cells and glioblastoma cells, helps with ACE inhibition (reduces blood pressure), and reduces cardiovascular disease. Bioactive peptides have been found, which are neuroprotective. Cannflavins are anti-inflammatory and more. Cannabisin is also neuroprotective. It can even remediate toxic “forever chemicals.”

Ten times more fiber (hurd and bast) is produced on the farm than this product, adding another income stream for the farmer. It can be 3 times better at reducing greenhouse gasses than Hempcrete, and 11 times better than Electric Vehicles. This hemp product also helps another pressing global problem, that of food security and sovereignty.

It has the potential of complementing and improving production of other domestic grains, such as soya, corn, sunflower, and wheat.

That one hemp product is… shelled hempseed as food, and the simple process of shelling it revolutionized the hemp industry in just one generation, the biggest change for hemp in thousands of years.

You may know hulled or shelled hempseed as “Hemp Hearts,” which is actually a brand name of Rocky Mountain Grain Products in Alberta Canada. In the ’90s, many of the same people now using his brand name used some derivation of “Hemp Nut,” a brand name of HempNut, Inc. in Santa Rosa California. Before CBD, shelled hempseed was the value-driver for hemp and soon might be again since everyone eats, sometimes even three times a day.

Over 20 years ago hemp foods were on national TV dozens of times, magazine, local TV and radio hundreds, and in thousands of newspapers across the country, adding up to over 100 million impressions.

Today, the academic research and technical industrial advances are frequent and impressive, new discoveries and products monthly. Almost 100 companies currently make hemp foods in the U.S. alone, a few are even publicly-traded. And there are dozens more abroad, from China and Japan to Europe. Many governments once opposed to hemp foods now educate on it, including the U.S., Canada, New Zealand, and Australia. 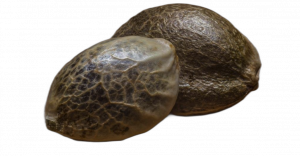 Hemp (Cannabis Sativa L.) is one of mankind’s oldest cultivated crops, therefore hempseed is as well. Its use as food is millennia older than either soya or rice as food. 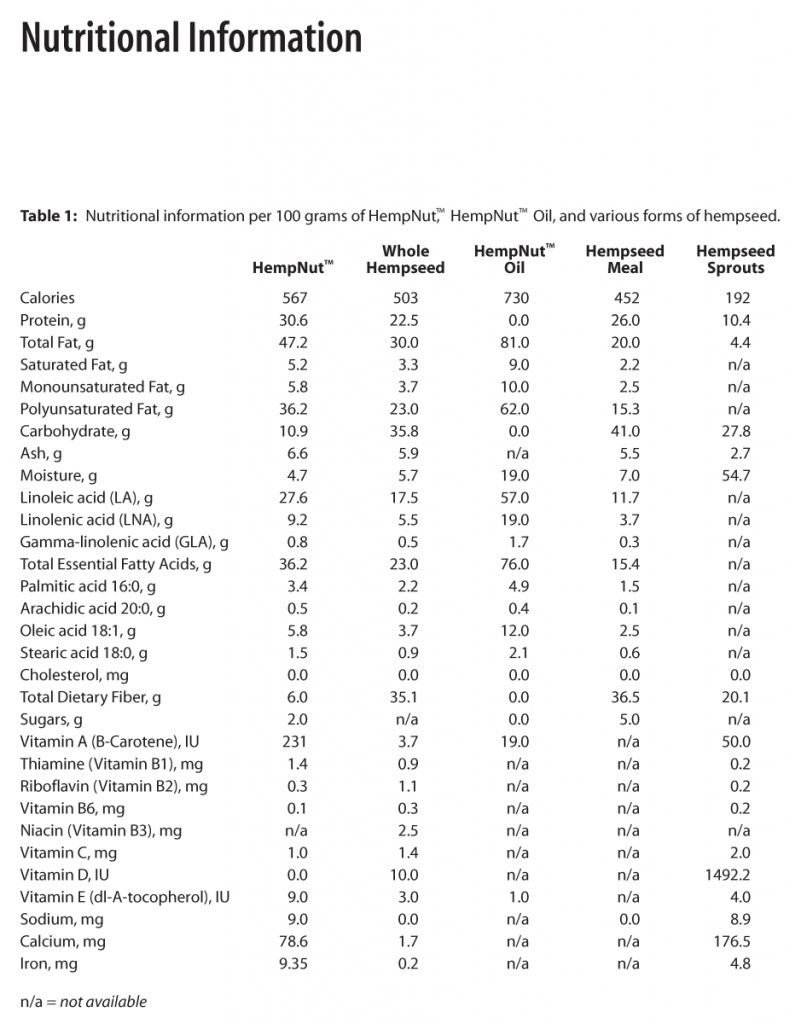 While the stalks provided utility to early mankind, the seed helped nourish and sustain them and their animals. High in complete protein (second only to raw soybean) and one-third essential fatty acids omega-3 and -6, the seed is a nutritional powerhouse that can be eaten raw, unlike corn or soya. 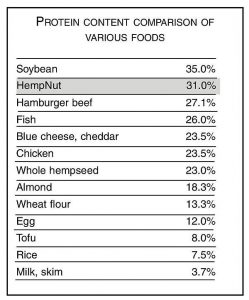 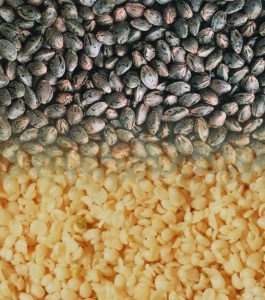 Whole hempseed has the shell on it (top half of image at left), but in 1996 shelling of hempseed began and it revolutionized the industry, the biggest innovation in hemp in millennia which made the seed not only more palatable but also more nutritious (by removing the non-nutritive shell). See it in the bottom half of the image at left.

The flavor of shelled hempseed is not unlike that of sunflower seed, or pine nuts. It can be used in almost any recipe or commercial food. Shelled hempseed became the industry’s first billion-dollar hemp segment, the one with the most customers current and potential, and the most potential retailers and uses. In China, a billion people still eat it weekly. Hempseed for food has long been 90% of Canadian hemp. 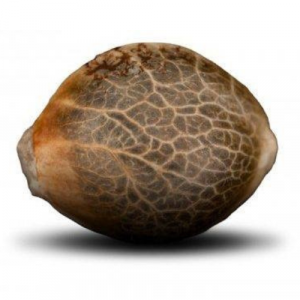 Food from hempseed is hemp’s value driver. Unapproved and expensive Hempcrete struggles to find a place in the mainstream building trades, CBD is illegal to FDA and the market crashing, fuel puts expensive hempseed oil into cars instead of stomachs, there is almost no processing in the country for hemp textiles, and hempseed for animal feed just continues the failed CAFO system turning abundance into scarcity.

But hempseed for food is not only a commodity proven in the global marketplace for over 25 years, it is 100% legal to FDA, the best hemp product to fight climate change, has a potential market of 100% of consumers, is the easiest for new or existing companies to add to their offerings, can be used by potentially tens of thousands of businesses, and has the potential to diversify and democratize the hemp industry for motivated entrepreneurs.

Especially in this age of food insecurity, feeding hungry mouths a complete protein high in omega-3 is a noble and high calling. 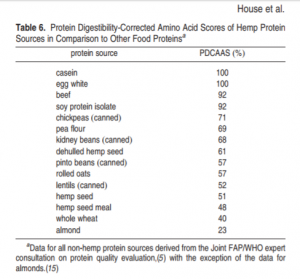 Hempseed rightly has a role in the growing plant-based foods industry, but the traditional food industry media don’t understand it and the hemp and Cannabis media ignore hemp food’s contribution. Meanwhile, one law after another has been passed hurting the hemp food industry, from California to Washington DC, even Europe. By not having organized advocacy, hemp foods have long been the political sacrificial lamb.

HFA is the trade association for old-school makers of hempseed foods that make you healthy, not high. Although one of the essential fatty acids in hempseed is the building block of Endocannabinoids in our body, and for millennia hempseed oil unknowingly contained cannabinoids, we do not promote foods which are marketed as containing cannabinoids such as CBD and THC as it dilutes our Mission.

Hempseed, hempseed oil, and hemp protein powder are Generally Recognized As Safe (GRAS) to the U.S. FDA, exempt from Novel Food registration in the European Union, and hemp products are exempt from the U.N. Single Convention Treaty on Drugs. In other words… legal!

Hempseed has an illustrious history in the annals of industry, it was used as the basis used to determine the modern theory of animal feeding. It was also where the enzyme protease was discovered, and the material used in early patents for films, filaments, adhesives, and culture media. 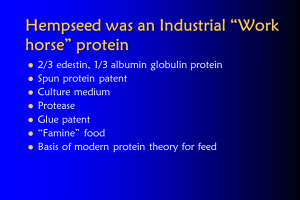 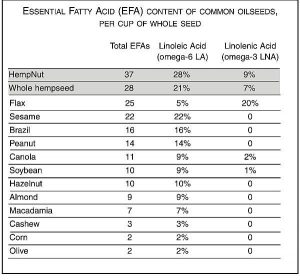 Since 1998 the Hemp Food Association has been dedicated to advocating and promoting the humble hempseed as a food, in all its many forms. The HFA website includes a Directory of almost 100 hemp food companies, Breaking News with emerging studies on hemp foods, dozens of original Articles, and over a dozen Free Downloads.

Here’s a free download of The HempNut Book, with tons of references and a glossary:

Here’s a free download of an article on hempseed nutrition from a founding Advisor of the HFA:

Here’s a free download of an article on the nutrition of hempseed oil from two founding Advisors of the HFA: