Many don’t realize that in the early years the American Soybean Association hated us vegan food producers because we could turn scarcity into abundance, with our 16:1 net protein yield over meat. They saw us as a threat to factory farming of meat back then.

Opposing hempseed today, which has been fodder way longer than even rice or soya, would be right up their alley. Ironically, until 1999 the birdseed market for hempseed was around 3,000 tons/year, but was lost by neanderthal politicking and dark lies. I can’t help but wonder that without the loss of that market, would the industry have to jump through all these USDA hoops now? 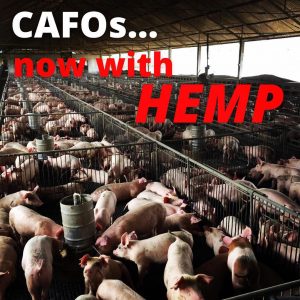